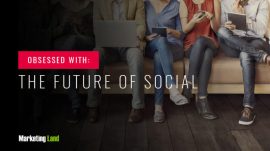 This is the latest installment of our series focused on the ways social platforms and ad strategies are evolving.

Instagram advertisers and businesses on WhatsApp, for the most part, are well aware the platforms are owned by Facebook, but whether or not users know this detail is up for debate. This is likely to change with the recent report by The Information that Facebook plans to rename both apps to include Facebook’s branding.

Soon, Instagram will be listed as “Instagram from Facebook” and WhatsApp as “WhatsApp from Facebook” in Apple’s app store and Google Play, according to the report. The changes are not all that much of a surprise considering Facebook CEO Mark Zuckerberg’s announcement earlier this year that the company is integrating its family of apps, building a unified architecture to streamline messaging across the platforms.

But what impact will the rebranding of the two app acquisitions have on marketers? Instagram’s advertising business has been growing rapidly. After a tumultuous year of user privacy debacles and credibility issues, could Facebook’s name hurt its connected apps? Or will the move to add the Facebook name to Instagram and WhatsApp strengthen the company’s brand among its advertisers?

We asked marketers if they believed this was a step in the right direction for Facebook, Instagram and WhatsApp. While most said it makes sense from a business angle for Facebook, the reviews were mixed in terms of how it might impact advertisers.

Creating a seamless platform for advertisers

Michael Ashley, vice president and managing creative director for SCOUT Ad Agency said it was the right move from in terms of Facebook’s own interest.

“Considering that WhatsApp and Instagram represent Facebook’s biggest growth potential, it makes perfect business and marketing sense to bring all three platforms together under one unified brand umbrella,” said Ashley, “Everything becomes a lot more seamless for marketers.”

Aaron Goldman, the CMO for 4C, an ad management platform and Facebook marketing partner, points out that Facebook has been positioning Instagram and WhatsApp as part of the “Facebook Family of Apps” for some time now.

“Savvy advertisers have been taking a portfolio approach to budget allocation and creative optimization across the platforms,” said Goldman, “Changing the names of Instagram and WhatsApp will help strengthen the association with Facebook in the minds of the consumers and further compel brands to optimize their program holistically.”

Will it have an impact on consumers?

“From a consumer standpoint, Facebook brings a massive amount of credibility and privacy baggage, not to mention a fundamentally more monetized, less community-led approach to engagement,” said Ashley, “I think these factors have the potential to turn a lot of core users of Instagram and WhatsApp off, especially in the near term.”

Turning off core users could result in less engagement for brands on the platforms, reducing campaign performance and returns on ad spend. But, Josh Thompson, senior social media strategist at Portent Digital Agency, doesn’t believe changing the name of Instagram or WhatsApp — or tightening their connections to Faceobook — will even register for most users.

“I do not feel the rebranding will hurt marketers or advertisers. I suspect the shift in branding will be subtle and few people will notice in the beginning, eventually being an afterthought,” said Thompson. He thinks it will help tie together Facebook’s network of apps for people, and ultimately improve the overall user experience.

“Two years ago there was a lot of press and noise about the new Instagram logo, which lasted for a week,” said Thompson, “Instagram has since grown at an incredible speed.”

The notion that Instagram and WhatsApp users are all that invested in the platforms’ ownership is anyone’s guess. Nick Smith, Digital Content Specialist for the City of Gaithersburg, Maryland, isn’t convinced that it matters.

“I don’t think people are that aware that WhatsApp is part of the Facebook ecosystem. I do think there’s a higher proportion of people who know Facebook owns Instagram because the app is more popular and more interconnected — both in design and functionality — with the Facebook platform,” said Smith, “I think there’s a larger number of people who feel, as long as the platform does what they need it to do, it doesn’t matter to them who’s pulling the strings.”

Smith does see it as a positive move for consumers in general, “It’s a good step to make people think about what they’re doing with their information and data.”

“As Facebook seeks to monetize WhatsApp, and with its foray into payments with Calibra, Facebook wants to make its messaging platform more business friendly. Unifying its messaging products is one way to do that,” said Verblow, “It’s also possible that Facebook sees antitrust clouds gathering on the horizon and wants to bind its products more tightly together to make it more difficult for the government to break them up.”

Verblow does see a potential downside for marketers, “If Facebook damages the Instagram and WhatsApp brands, such that usage declines and marketers have less opportunity to reach potential customers.”

But even during the aftermath of Facebook’s Cambridge Analytica scandal — and continued reports of stalled user growth on the platform — the company’s ad revenue has not suffered. The idea that adding Facebook’s name to the apps it owns could hurt the company’s advertising business would seem unfounded.

Verblow’s argument that Facebook is gearing up to combine all facets of its company into one unified front could very well result in Facebook strengthening its ad business, becoming an even more dominant ad platform.