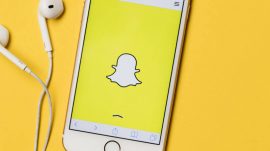 A year ago Snapchat enabled app advertisers to attach deep links to their campaigns, so people could swipe up on an ad and open to a specific place within the advertisers’ app. The move was an attempt to make Snapchat’s app-install ad format useful for not only getting people to download an app but to actually use it. Now Snapchat is improving these ads’ ability to perform the latter and advertisers’ ability to evaluate how their ads perform.

Snapchat will automatically create the deep links for advertisers’ campaigns so that swiping up on an ad will immediately open a brand’s app, assuming the app is already installed on a person’s phone. Previously swiping up on an ad would display a web page featuring a button that a person then had to tap in order to open the brand’s app, and the brand was responsible for creating the intermediary web page. If a person has not yet installed the app, swiping up on the ad will open to its listing in Apple’s or Google’s app stores.

Snapchat will also give advertisers new windows into how many installs their ads generated over time, even if people didn’t directly install the app from an ad. Brands will be able to see how many times people swiped up on an ad to install their app in the past day, seven days or 28 days. And if a brand has enabled a Snapchat-approved mobile measurement firm to trace app installs to ad impressions, they will be able to see how many people who installed the app had seen its corresponding Snap Ad and analyze these view-through attribution stats for the past hour, three hours, six hours, day, seven days or 28 days.

Finally app install advertisers will be able to use Snapchat’s Ads Manager self-serve tool to see how the people who installed their app through Snapchat use their app through the ads’ in-app event tracking. For example, a gaming app whose Snapchat campaign deep-linked to a certain level will be able to see how many of the people that swiped up on the ad completed that level. That information can come in handy if the gaming app is running multiple campaigns linking to different levels and wants to see which succeed in getting people to actually play the game.

App advertisers were already able to see these post-install event stats through the mobile measurement firms they use to track their Snap Ads’ performance. And while Snapchat’s Ads Manager will only report totals for each event category, the measurement firms are able to trace the relationship between events so that advertisers can see information like, of the people that opened an app, how many completed a level or added a product to a shopping cart.