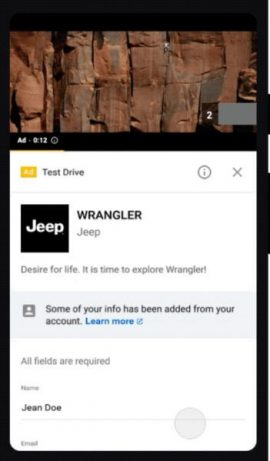 Google has been testing lead form ad extensions in Search campaigns since last fall. Now, advertisers can use the lead form extensions in YouTube and Discovery campaign ads as well. The company also announced new initiatives to automate data imports into Google Ads.

Lead form ad extensions will be available in Display campaigns later this year, Google noted in its announcement Wednesday.

Then there is the option to add questions to your form based on pre-set questions by vertical. For example, under Real estate, an advertiser could opt to add “What price range are you looking for” to the lead form.

A few things to note about lead form extensions:

Automating data imports. To help advertisers optimize their campaigns to generate leads that are more likely to convert into actual sales, Google said it will be rolling out solutions to make offline conversion imports easier “by just using the information people already give you in your lead form” later this year. Several advertisers are testing this now.

Currently, you can use Zapier to automatically import offline conversions from your CRM to Google Ads.

Lastly, match rates for customer match will update in real-time in the Google Ads interface.

Why we care. Based on this rollout to other ad campaigns, it looks safe to say that Google has finally cracked lead forms in ads — it tested contact form extensions in 2010 and cost-per-lead-ads in 2011. All of these solutions are aimed at helping small businesses, in particular, capture and act on more leads from their digital campaigns.

Quora recently rolled out its Lead Gen Forms product as well, which also have a Zapier integration that allows you to send leads to Salesforce, Gmail, Marketo or other system.

From comedy to diversity
24th September 2020